Speedway Bikes have no brakes, just one gear, a clutch and a 500cc engine which runs on high octane methanol. A speedway bike is so powerful it can hit 60mph faster than a formula 1 car.

The bikes race around oval circuits of around 300 metres in length in an anti-clockwise direction over 4 lap races. To get around the tight corners at high speed the riders actually have to wind the throttle on to bring the rear wheel out and initiate a “skid”!

Speedway meetings can be run as individual events although what you will usually see week in and week out, at most tracks around the country, are 2 teams racing against each other. The 2 teams have 7 riders each and they race over 15 heats with 2 riders from each team in every heat. If a rider wins a race he will earn his team 3 points, if he comes second he will earn them 2 points, 3rd and they will only earn 1 point and if he comes last the they won’t get anything!

There are 3 leagues in the UK

Speedway bikes are a unique type of motorcycle. Originally the engines used were upright, the name reflects the way they fitted into the frame of the bike. Nowadays, in order to handle the bike more effectively, speedway riders use laydown engines in their set ups. The bikes weigh a minimum of 77 kilograms, have one gear and do not have brakes, the clutch is used as a release mechanism at the start of races. By using different engine and rear wheel sprockets the gear ratio can be adjusted for different track sizes and conditions. 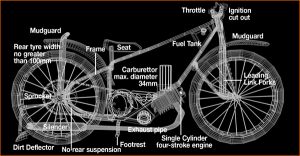 Only pure methanol is used to fuel the bikes, because methanol makes it possible to use a higher compression ratio than with other fuels, resulting in high engine power outputs. The typical speedway smell doesn’t come from the methanol but from the castor oil (vegetable oil) based engine oil. Some of the latest synthetic racing oils also give this irresistible racing atmosphere.

All speedway bikes must have a safety cut out device fitted that cuts off the circuit of electrical supply by pulling a lanyard attached to the rider’s right wrist.